We are delighted to reveal the cover of our twenty eighth publication, Naming the Land by Nicola Warwick which features the stunning artwork of London based artist, Samantha Read.

Naming the Land is Nicola’s third collection and will be released on the 30 July. If you can’t wait that long then don’t despair. We are thrilled that Nicola will be joining Anne Steward on Friday 2 July to help celebrate the official launch of The Colour of Light as well as giving us a sneak preview of her forthcoming collection.

You can join both Nicola and Anne on-line at 7pm by simply emailing maytreepress@gmail.com with the word LIGHT in the title field and we’ll send your invite the day before.

You can read more about Samantha here: Sam Read – Byard Art and follow her on Instagram @sam_read_artist

We are very pleased to reveal the cover for Joe William’s forthcoming Maytree collection, The Taking Part.

The Taking Part is a short collection of poems on the theme of sport and games, though as is often the case with poetry, most of it isn’t really about sport and games at all. The cover features the painting, Back Street by Northern artist, Walker Scott. The Taking Part will be released in late May with an official on-line launch event featuring some wonderful guest readers on the 29 May – we’ll have more information on how you can join in the fun nearer the time.

Joe Williams is an award-winning writer and performing poet from Leeds. His latest book is the pamphlet ‘This is Virus’, a sequence of erasure poems made from Boris Johnson’s letter to the UK during the Covid-19 pandemic. His verse novella ‘An Otley Run’, published in 2018, was shortlisted in the Best Novella category at the 2019 Saboteur Awards. His poems and short stories have been included in numerous anthologies, and in magazines online and in print. Despite all of that, he is probably most widely read thanks to his contributions to Viz.

We are delighted to share the cover for F R Kesby’s forthcoming Maytree publication, Shul.

Shul will be released on the 23 April 2021. The word Shul is both a Yiddish word meaning synagogue (derived from the German for ‘school’) and a Buddhist concept of emptiness left behind when something has moved on; hollows left after houses have been removed, footprints on paths, the wearing of rocks by a river. In Buddhism this emptiness is sought out, the relief of the space left when one stops worrying about the emotional marks you have left.

In this collection of poems F R Kesby has sought to explore those marks they have left on their own world and the relationship between their memories of physical and emotional spaces. From comparing the memories of their home town compared to what it looks like now to viewing their relationship through one small bed to exploring places heard about every day in the news, each poem links place and soul in a way that respects the history of the word Shul, both Buddhist and Jewish, while being intensely personal.

The cover was inspired by a photograph taken by the author of a heart etched onto the road. Local sculptor, George Coldwell who specialises in working with concrete and found objects, was commissioned to create an image based on the photograph. We think you’ll agree that it’s an amazing piece of art that wonderfully captures the essence of the book.

F. R. Kesby is a poet and storyteller from Leeds.  They have creative writing credits including Strix, Writers Café, Riggwelter, Runcible Spoon, Spilling Cocoa Over Martin Amis, 100Thousand Poets For Change, The Pangolin Review, Wanton Fuckery, Leeds Disabled Peoples Organisation and Leeds Savage Club as well as non-fiction credits with Women’s Republic, Walking in a Wireless Wonderland and View From a Walking Frame.  They have also had a radio play featured in Chapel FM’s Writing on Air Festival, have done numerous guest spots and headlined for Stirred, Word Club, NeurodiVERSE and Verse Matters as well as winning the Stirred Invisible Disabilities Poetry Slam 2018 and the Leeds Lit Fest Flash Fiction Slam 2018 as well as running their own events independently and as part of Leeds Lit Fest and Leeds LGBT+ Virtual Lit Fest.  They and their partner also started their own inclusive arts organisation, AirEvents, through which they help run performance nights and art classes and are currently working on a range of children’s books about gender and sexuality.  They are also a life long learner with an interest in linguistics, especially its relationship to culture and politics, they are currently rounding up the worlds slowest degree and are already planning what modules to take on to their masters.  When not wrestling with language they work in the charity sector and are a proud bunny parents to Sherlock Fluffs.

We are delighted to celebrate National Poetry Day 2020 with a new cover reveal for Colin Bancroft’s forthcoming publication, Impermanence.

Many of our readers will be familiar with Colin’s work within the poetry world which includes the hugely successful Poets Directory, the newly launched small press, Nine Pens and, of course, a huge track record of featured poems in a variety of magazines.

Colin originally hails from Manchester where he attended Manchester Metropolitan Univesity, completing a BA in English and MA in Creative Writing at the Manchester Writing School. He now lives in the North Pennines where he is studying for a PhD on the Ecopoetics of Robert Frost.

As we publish our twentieth collection, we are also thrilled to be working once again with Marsden based artist, Kevin Threlfall. Kevin’s work previously featured on Pauline Rowe’s The Ghost Hospital which was shortlisted in the 2020 Saboteur Awards.

Impermanence will be released on the 30 October 2020 with pre-orders available direct from Colin from the 23 October.

It’s always a special day here at Maytree HQ when we reveal a new cover – the promise of a wonderful collection of poems lovingly presented in one of our unique cover designs –  the perfect antidote to this strange world we find ourselves witnessing.

Every cover is special but non more so when you invite a favourite artist to create a work uniquely for the project. For unfolded we asked the brilliant Alice Parker – who many will remember created the image for the award winning, The Collective Nouns For Birds – to respond to some of Olivia’s poetry.

Alice chose a particular favourite poem of ours and created the wonderful enigmatic image, Unstil.

Unfolded by Olivia Dawson will be released in September. Look out for more information very soon and don’t forget to sign up to our newsletter to get news of all our new releases, offers and submissions direct to your inbox Join our mailing list 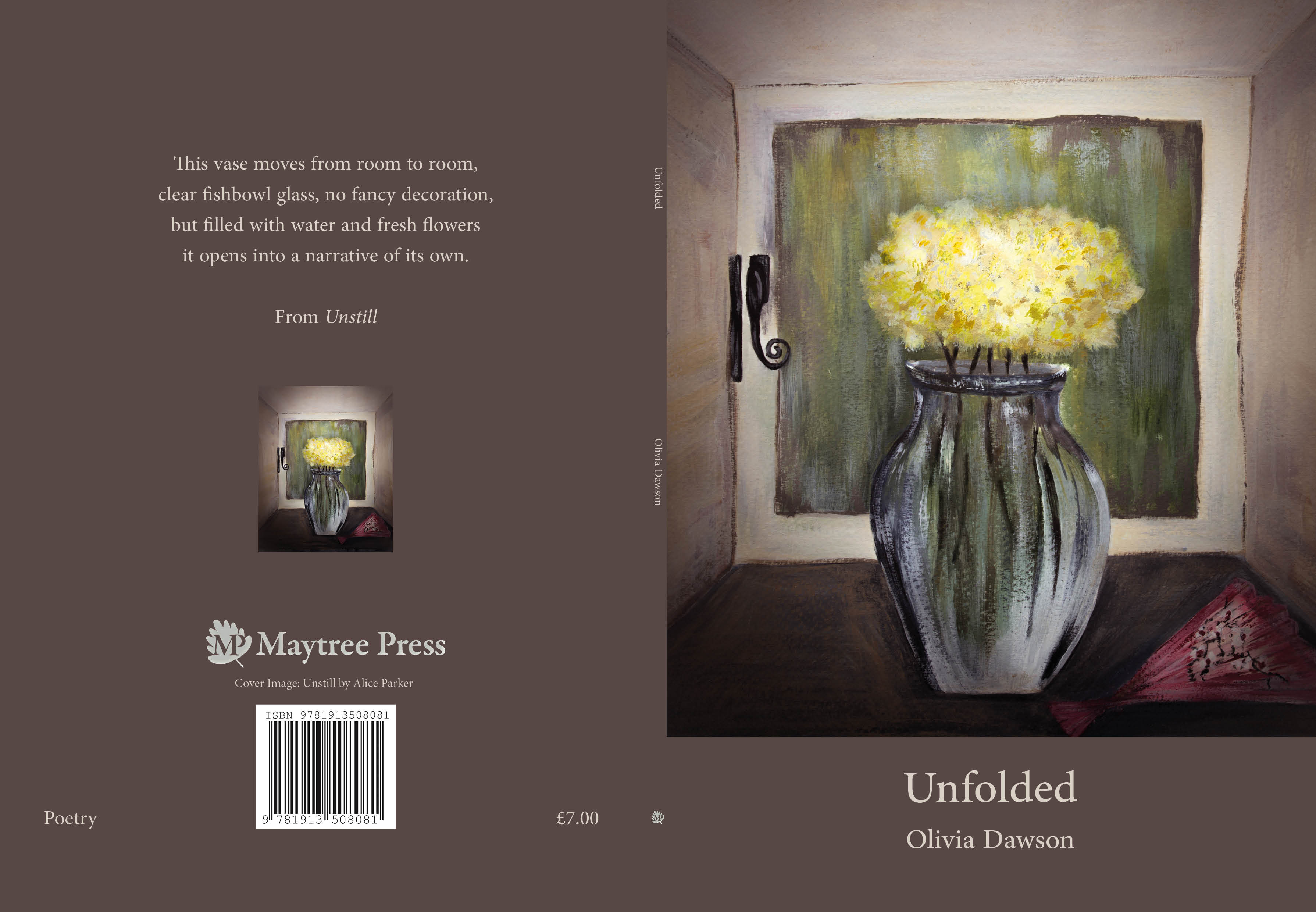