It’s always an exciting time here at Maytree HQ when we release a new cover out into the world but even more so when it features artwork by one of our favourite artists that we’ve been keeping under wraps for the last eight months.

For Jonathan’s cover there was certainly a case of a wind change after a butterfly had flapped its wings somewhere. We had known from an early stage, possibly as soon as we had received Jonathan’s manuscript, that we wanted to use Suzi Thompson’s artwork on the cover. Both David and Amanda are huge fans of Suzi’s work and have had the privilege of visiting her at her South Yorkshire studio as well as indulging in some prints which are strongly represented at galleries local to Maytree’s home.

The decision to use Suzi’s work was way back in those heady free days of summer 2019 so in many ways the idea was firmly put to the back of our minds whilst other work took priority. That was until the Marsden Jazz Festival in October when Jonathan made the journey across the Pennines and also stumbled into those same galleries and was introduced to Suzi’s work. We’d already had the go ahead from Suzi so imagine our delight when Jonathan began mentioning how much he enjoyed her work – we’re rubbish at keeping secrets so had to let him know that his new found favourite artist was also going to be his cover artist. I think we made a poet very happy that day. Fledge features the artwork, Edgelands. We had to crop the original version a tiny bit so that it would fit so here’s the original version:

Fledge will be released on the 31 July 2020. It’s a wonderful evocative collection with it’s heart set firmly in the natural world. A delightful read for summer 2020.

Many of our regular readers will be familiar with Jonathan’s work, particularly as a reviewer but for those who have missed out you can find out more from his entertaining blog northern jim 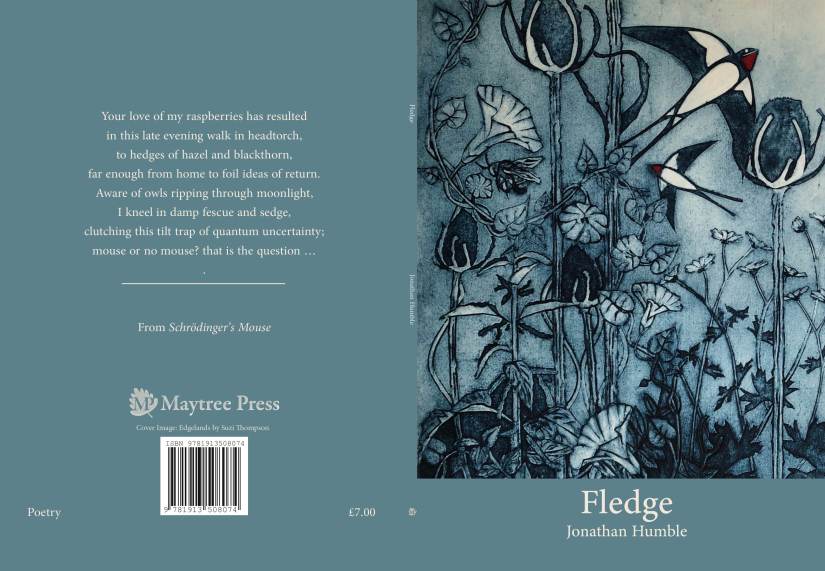